27 Adar — The Furnace of Affliction 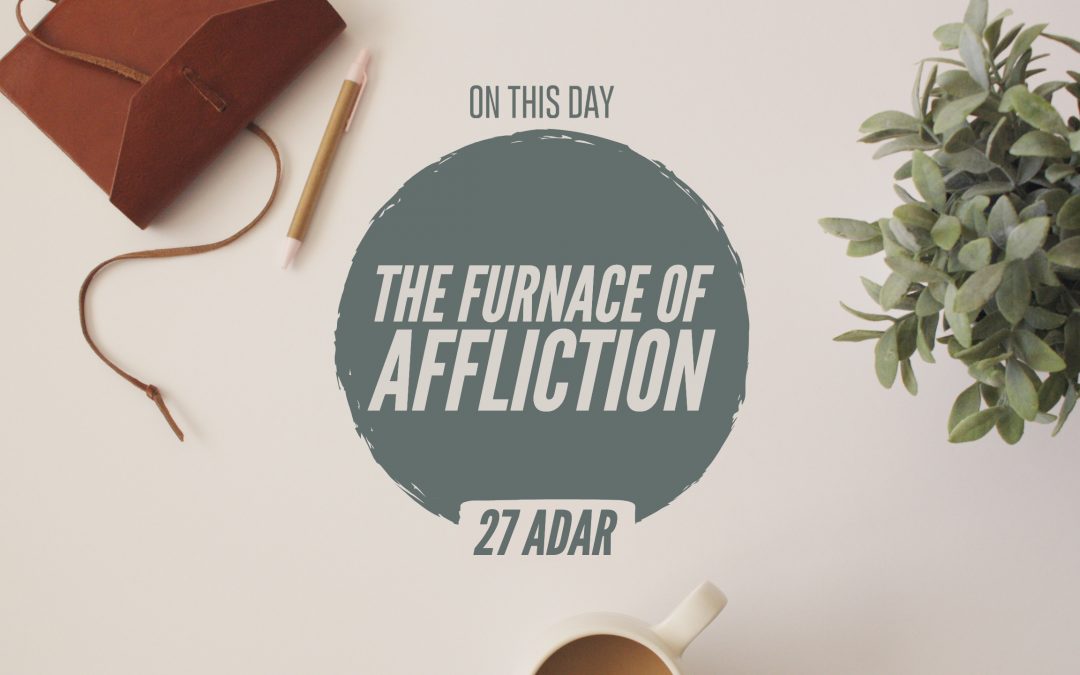 It was on this day in the year 1979 that Menachem Begin of Israel and Anwar Sadat of Egypt signed the peace treaty between their countries. Since that time, Israel has enjoyed three decades of relative peace with Egypt. We say, “relative peace,” because Egypt has always represented oppression for Israel and the travail by which the Creator brought forth His people. So, one wonders if “peace” is the appropriate word when considering Egypt and Israeli relations. Consider how God describes Egypt, as it relates to the children of Israel:

“But the Lord has taken you and brought you out of the iron furnace, out of Egypt, to be His people, an inheritance, as you are this day.” (Deuteronomy 4:20)

In this passage, Egypt is a furnace that is intended to melt unusable materials, that they may be molded into something more useful. While in Egypt, His people had, to some degree, assimilated into Egyptian culture and, consequently, had to be placed in the furnace of Egypt. The pagan traits and idolatrous ways had to be placed in the fire so that they could come forth as a people God called, “Israel, My Son.” So, considering what Egypt is to Israel, is it proper to think that a true peace exists between the two? Perhaps it would be better described as a cease fire but, if a cease fire, that suggests at some point in the future the fire will be rekindled.

Over the last decade, significant and world-changing events have occurred in Egypt and throughout the region. Civil wars, toppled governments and political unrest is the norm in that part of the world but has been especially intense of late. Many of the regional issues have boiled over into other countries, including Europe. In fact, the so-called Arab Spring is directly related to the increased Islamization of Europe. This is important to point out because, for the believer, the world is Egypt. The world is the Creator’s furnace used to dissolve our will and desire so that we may be molded into into vessels of honor.

“Behold, I have refined you, but not as silver; I have tested you in the furnace of affliction. For My own sake, for My own sake, I will do it; for how should My name be profaned? And I will not give My glory to another.” (Isaiah 48:10-11)

It seems that He is saying, once again, He will use “Egypt” as a furnace so that He can redeem us from among the nations. He does this, not because we are great and wonderful people but for His own name’s sake. Still, we mustn’t delude ourselves into thinking that we can make peace with Egypt or with the carnal nature that lurks within us. At best, all we will end up with is a cease fire and as soon as we let our guard down, our carnal nature will rise up and try to conquer the spirit man. The only way that we can be find peace is to crucify the flesh and to stand guard against those things that would come from external forces enticing us to think as Egypt thinks.

We should not settle for a cease fire. We must determine within ourselves to die to our will, today, and the next and the day after that. If we do this, the Spirit of God will expand into every area of our lives empowering us to keep Egypt out of our lives. We can’t make peace with Egypt. We will only realize true peace when the Prince of Peace comes to rule and reign. Let His reign begin, today, in our hearts.