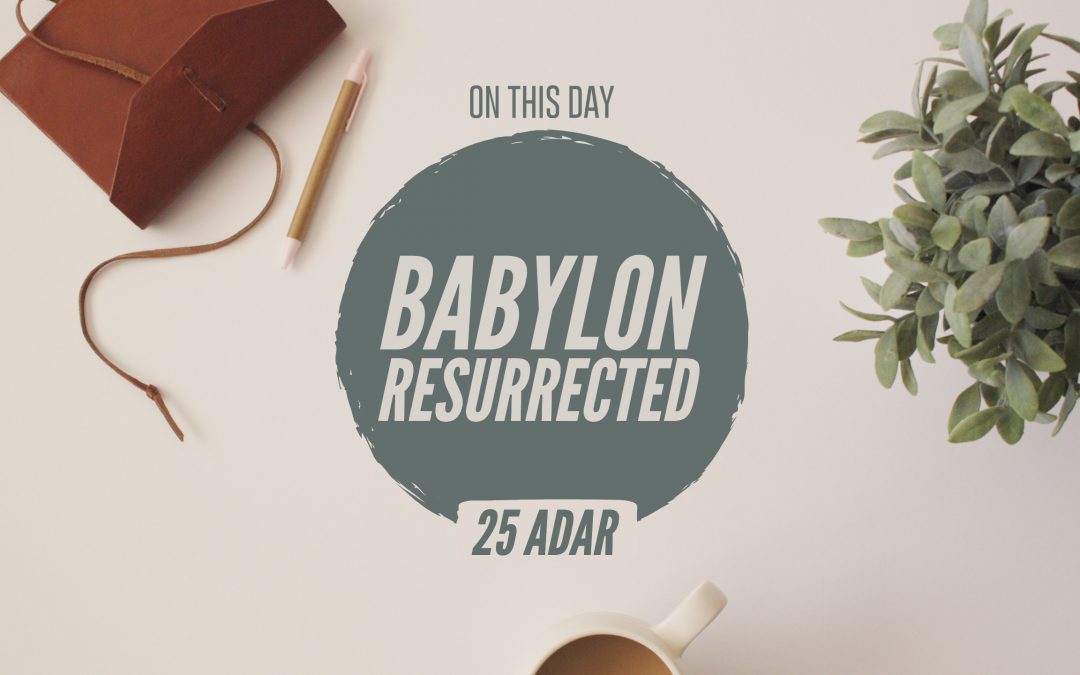 It was on this day in the year 561 B.C. that Nebuchadnezzar, King of Babylon and the conqueror of Jerusalem, died. Years before, Nebuchadnezzar had been told by the prophet Daniel that he, and by extension Babylon, was represented in a dream by a head of gold, described for us in Daniel chapter 2.

In the next chapter, Daniel 3, Nebuchadnezzar commissioned the building of an image of solid gold, whereas in the dream he had seen an image of gold, silver, brass, and iron. Calling for an image to be made entirely of gold suggest he wanted to create an image of himself. Gathered on the plain of Dura, all of his subjects, administrators and governors were commanded, at the sound of the musicians, to bow down and worship this image of the King of Babylon. This scenario should sound familiar because this exact scene will play out at the end of days.

Revelation 13 is a replay of what occurred in Daniel 3 demonstrating, yet again, that the beginning tells the end. Moreover, in Daniel 4, this same king of Babylon was given the heart of a beast and was reduced to eating grass like an ox for a total of seven years. At the end of that time, though he had lost his kingdom for the duration of illness, he was  restored to his throne and to power.

If we believe that we are living in the last days then we know that, according to Revelation 17, there will arise a beast that John describes as, being in the past, not present in John’s day but would arise from the abyss and be restored to power for 3 1/2 years. It is during this time, that the false prophet will command all, great and small, to worship the image of this beast.

According to Revelation 13, this beast has seven heads, one of which received a deadly wound with the edge of a sword and which was healed. That means that this “head” – better, “principality” – will be revived and the beast which has been in the abyss, will rise again. Revelation 17 and 18 plainly reveal the identity of that principality – it’s not cryptic and hard to understand. It’s a name that is mentioned again and again, and it’s not Rome – it’s Babylon.

As I have previously stated, the adversary is a master illusionist. He wants you looking at one hand that has the colorful handkerchief, because he doesn’t want you to see what’s going on in his other hand. Considering our topic today, is it possible that, for centuries, the adversary has seduced us into putting most of our end-time emphasis on Rome; to watch for a revived Roman Empire? I contend that is exactly what he wants us to because he doesn’t want us to notice that Babylon is being revived right under our noses.

What is Babylon, exactly? It is more than a geographical location. According to the Bible, Babylon is more about a way of thinking and living; its about mixing and mingling different philosophies and ideologies together. It would equivalent to what modern culture calls “coexistence,” “tolerance” and “social justice.” Understand that Babylon is arising and saturating the nations of the world with its way of thinking. Every person on earth can potentially be infected and affected by this poisonous mindset and those who are not truly following the Messiah will be.

“Come, I will show you the judgment of the great harlot who sits on many waters, with whom the kings of the earth committed fornication, and the inhabitants of the earth were made drunk with the wine of her fornication.” (Revelation 17:1-2)

What is her fornication? It’s mixing the seed of her husband with the seeds of her other lovers. Mixing and mingling – that is the essence of Babylon. However, though Babylon is rising from her grave to assume authority over the nations of the world, according to Scripture, the reign will be short lived. That is because our King, the King of kings, has risen from His grave and is alive forevermore. He will, in His time, come and rule over all nations, including Babylon. He will establish Jerusalem as His Throne and will rule with justice and mercy.

“Even so, come Lord Yeshua.”