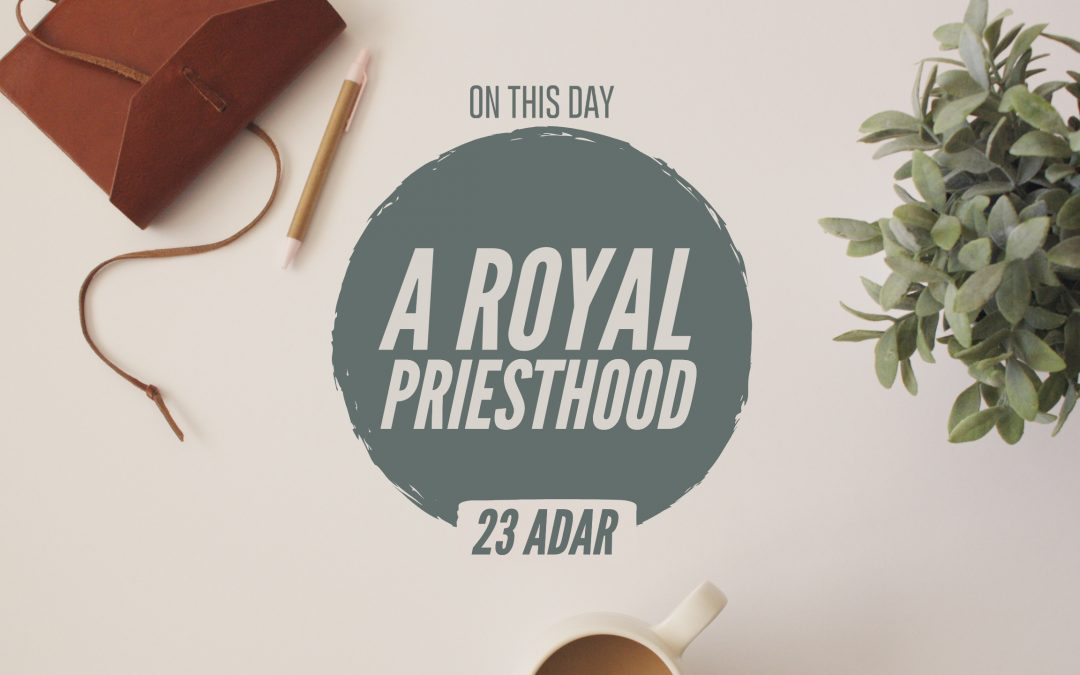 It was on this day that two prominent events are believed to have occurred. The first is the dedication of the second Temple in 516 B.C; the second is the beginning of the consecration period for Aaron and his sons as they entered the priesthood. The latter is recorded in the book of Leviticus 8:33-35:

“And you shall not go outside the door of the tabernacle of meeting for seven days, until the days of your consecration are ended. For seven days he shall consecrate you. As he has done this day, so the Lord has commanded to do, to make atonement for you. Therefore you shall stay at the door of the tabernacle of meeting day and night for seven days, and keep the charge of the Lord, so that you may not die; for so I have been commanded.”

In both of these cases – the dedication of the Sanctuary and the consecration of the priesthood – an incredible amount of dedication was required of those involved with these things. Those who built the mishkan, the Tabernacle, and later on, the Temple, as well as those who ministered within those structures, were given great responsibility that demanded much from them. Understanding that, it might be that the priesthood was not as glamorous a position as people might imagine it to be. The job could become quite messy at times and potentially carried great consequence for failure. Considering that Aaron had once failed to restrain the people from mingling the holy with the profane (in the case of the golden calf incident), is it possible that his selection as High Priest was more of a consequence rather than a reward?

The point is that those who are called to lead God’s people, such as a teacher, pastor or evangelist, are held to a much higher standard than the rank and file believer. This is not because they are special, but because they are called to do something special. They are called to something that is holy that will affect a people God has called to be holy. Moreover, all of us, in whatever capacity, are obliged to faithfully represent the Creator’s holiness to the world. Thus, He requires holiness on the part of His priests, His ministers, and those who represent Him and yes, that includes all of His people.

The challenge to us, today, is no different than it was in ancient times. Peter said that we are called to be a royal priesthood, a chosen generation and we are to proclaim the praises of Him who has called us out of darkness into His marvelous light (1 Peter 2:9). Therefore, we should remain in that light and walk upright before Him so those who dwell in darkness can distinguish light from the darkness. We should walk in holiness before Him so that we may fulfill the mandate given us as an individual and as a nation.

One of the primary responsibilities given to Aaron and his sons was to teach the people of Israel the difference between holy and profane, clean and unclean. In turn, it was incumbent upon the people of Israel to live in such a way that they were a proper example to the rest of the nations, in essence, teaching them the difference between profane and holy.

This concept is what the Temple in Jerusalem was all about. It was an ideal picture of the Father’s purpose in the earth – to have a holy, set apart people among whom He could dwell and who would inspire other people from the nations to come into the light. Messiah put it this way:

“You are the light of the world. A city that is set on a hill cannot be hidden. Nor do they light a lamp and put it under a basket, but on a lamp stand, and it gives light to all who are in the house. Let your light so shine before men, that they may see your good works and glorify your Father in heaven.” (Matthew 5:14-16)

Even as the darkness around us grows more intense, we must be resolved to consecrate and dedicate ourselves to the task He has given us. Let your light shine.