17 Adar — The Weapons of Our Warfare 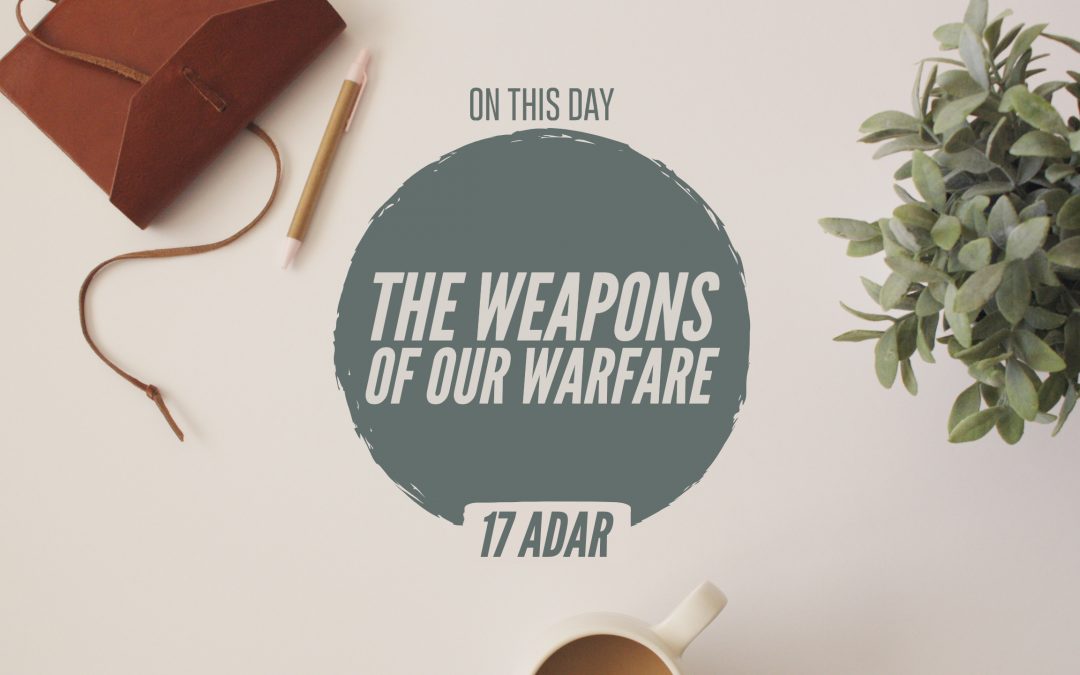 It was on this day in the year 66 A.D. that the historian Josephus arrived to assume command of some insurgent Jewish forces in the Galilee and consequently save the local Jewish population from an attack by non-Jewish forces. Two months later, the official outbreak of the Jewish rebellion against the Romans began and it was this same Josephus who recorded for us the details of this revolt and its terrible outcome. There have been times when God instructed His people to go to war with their enemies and, in those times, we see that they have prevailed. But the Bible lets us know that there have been times when His people went to war without His instruction and were defeated.

One such account is immediately after the people refused to enter the land of Canaan, after hearing the evil report of the spies and in defiance of God’s instruction. As a result, an awful plague swept through the camp, killing thousands. Only then did the people decide they were ready to go and fight the Amalekites and the Canaanites. But to that, Moses said:

“Do not go up, lest you be defeated by your enemies, for the Lord is not among you. For the Amalekites and the Canaanites are there before you, and you shall fall by the sword; because you have turned away from the Lord, the Lord will not be with you.” (Numbers 14:42-43)

Unfortunately, those people decided to resist the Lord’s command yet again, and were consequently slaughtered in battle. It seems that the Jewish revolt of the 1st century was another such time. The outcome of this revolt had already been determined about 30 years prior when Yeshua warned that Jerusalem would be surrounded by her enemies and the Temple buildings would be destroyed. His instruction to those who saw these events was to flee, not fight.

It occurs to me that it’s possible that we may be facing some similar circumstances in our day. There are wicked forces at work that seem to be prevailing and it might be that things will not turn out well. Why is it happening? Probably for the same reason that these types of things happened in times past: God’s people refusing to walk in obedience.

As we see wicked schemes and plots develop, some have chosen conventional means to battle against them, political or otherwise. While one can certainly understand the passion about these things, it should be pointed out that if we truly are in the last days, we will not win these battles by conventional means. Paul told us:

“For though we walk in the flesh, we do not war according to the flesh. For the weapons of our warfare are not carnal but mighty in God for pulling down strongholds” (2 Corinthians 10:3-4)

What we’re facing in this day and time is not something that can be overcome with ballots, bullets or bombs. It must be by the blood of the Lamb, by the word of our testimony and we must not love our lives, even unto death. A sobering thought though that be, it is one that we seriously have to consider for the time in which we live. But there’s also some good news in all of this, because Messiah said:

“When these things begin to happen, look up and lift up your heads, because your redemption draws near.” (Luke 21:28)

Instead of focusing on how to combat these things through conventional methods, perhaps we should look up, lift up our heads and focus on the author and finisher of the faith. All the signs are signaling that our redemption is at hand.