30 Adar I – Significance of the Insignificant 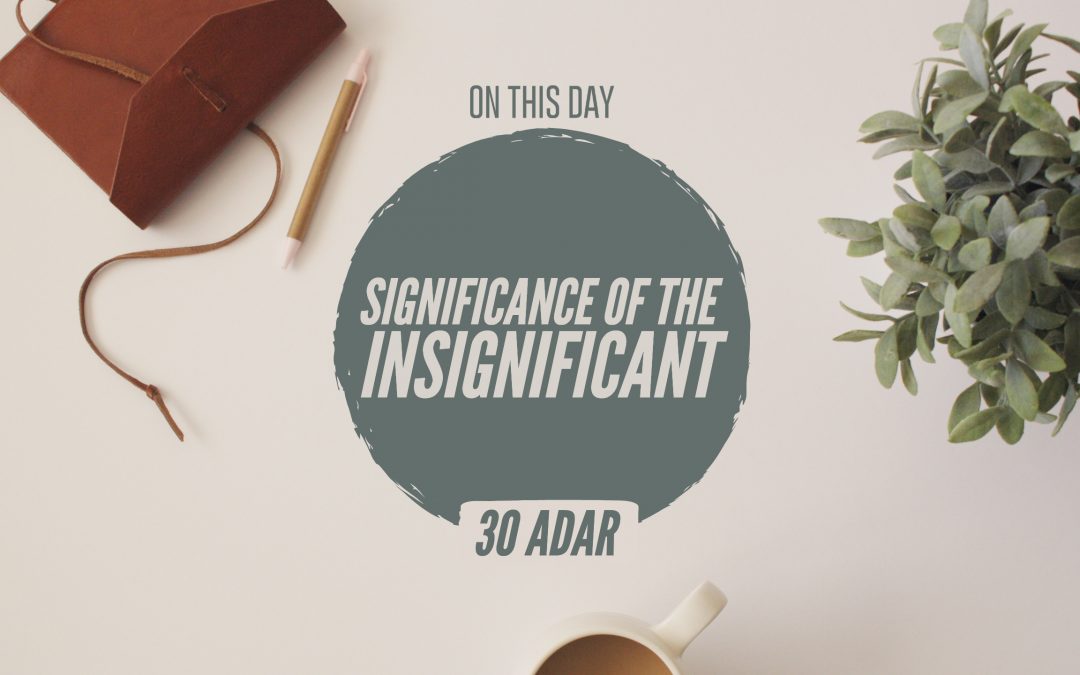 Today is the 30th day of Adar, the last day of the first month, Adar and tomorrow will mark the beginning of the new month, Adar Shini, or Adar II.

The beginning of the month, in Hebrew, is called Rosh Chodesh (“Head of the month”) and is typically every 28 to 30 days, depending on the cycle of the moon. The new month or “New Moon” speaks of many things that are important but I wish to address one related concept that is commonly overlooked – the significance of the insignificant.

Time is calculated by more than just months. Months become years, years become decades, decades become centuries and centuries become millennia. Yet, these great blocks of time could not be attained if seconds, minutes and days weren’t accounted for. Theoretically speaking, if it were possible to remove these seemingly insignificant components of time, then all the more noticeable aspects of time – years, decades and  centuries – would fall apart. Therefore, we understand that what many regard as insignificant is actually critical, as it relates to the big picture.

We see this concept demonstrated in the mishkan, the Tabernacle. The Tabernacle would not have been possible if it had not been for the talents of the artisans and craftsmen such as  Betzalel and Oholiav. Yet, their talents as craftsmen would have been pointless if the people had not brought their contributions of materials and precious things. Their  contributions would not have been possible had Moses not commanded the people to go and acquire silver and gold from their Egyptian neighbors as they were preparing to depart.

The point is that, before one beam or hook could be fashioned, several things had to happen all of which were dependent upon the other. One thing supports the next and the first step is the foundation for the next level. When the Tabernacle was completed, people could behold the manifestation of God’s will to dwell among them. When His Presence filled the house so that even Moses dared not enter, that was the culmination of many parts coming together as one. If fact, where the Tabernacle was concerned, there was only component mentioned in relation to the Tabernacle being one or, in Hebrew, echad. That part was the golden and bronze clasps. In other words, the Tabernacle would not have existed and, more importantly, could not have functioned as God’s House without those little insignificant clasps. In reality, what seems to be insignificant is very significant.

Where we are concerned, our role and purpose, whether it’s obvious to all or known to none, is significant as it relates to the Father’s purpose overall. With that in mind, let’s take a look at something Messiah said:

“Are not five sparrows sold for two copper coins? And not one of them is forgotten before God. But the very hairs of your head are all numbered. Do not fear therefore; you are of more value than many sparrows.” (Luke 12:6-7):

Messiah’s statements, here, reinforce the significance of the insignificant. Whether it be a sparrow or a hair on your head, God doesn’t lose track of them. All things He has created serve a purpose and there is no such thing as an insignificant member in His house. We need to understand that, regardless of how famous or unnoticed we may be, it is imperative that we fulfill our purpose and learn to be content in it. Maybe no one will ever hear of it or of us, but the Creator keeps track of these things. Each and every one of us are here to perform a role in His plan and that means there are people in the world who are dependent upon us to fulfill our purpose.

When the New Moon appears, it starts out as a little sliver; sometimes we have to strain our eye in order to see it. But what starts out small and seemingly insignificant is going to wax greater until it’s full. At that point, all will see the light of the sun reflected off the face of the moon and light will fill the darkness. Therefore:

“being confident of this very thing, that He who has begun a good work in you will complete it until the day of Jesus Messiah” (Philippians 1:6)

It doesn’t matter how insignificant your life or your purpose may seem to you. In the eyes of the Creator, it is significant simply because He ordained it.